July 6, 2017 by MobileSlotsGuru in Featured

Rainbow Riches is a colourful slot game released by Barcrest, a company that is popular in the pub and the chip shop around the UK because of the physical fruit machines. It has high-quality graphics and animations and also comprises of an autoplay function. This slots deposit bonus game is perfect for those players who love bonus features. It has an RTP of 95%.

These slots deposit bonus game is a 5 reels and 20 pay lines online slot game and even has some fruit machine styled elements in the bonus games. It is an Irish themed cool play slots and includes symbols such as Pot Of Gold, Wishing Well and Leprechaun. Whereas the standard symbols of this slot game include 10, Jack, Queen, King and Ace.

This slots deposit bonus game also consists of golden coin wild. It substitutes all the symbols apart from bonus feature symbols. This is even considered as jackpot symbol that provides players 500x of their win if they line up 5 of the golden coins wild in the row.

Rainbow Riches Logo is taken as the 2nd highest paying symbol upon the five reels and it comes stacked. 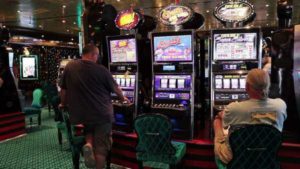 This is recognised as the fruit machine styled feature and in order to activate this, players will be required to place 3 Leprechaun scatters anywhere on reels. The players have to click on ‘Start’ so as to spin a wheel that will determine the number of the steps up the cash path they take. Also, they will continue spinning the wheel till it lands on the ‘Collect’ position or it reaches on top of cash path. Once they do either of them, they will get the multiplier which is displayed in their final position and that will be then multiplied by players’ total stake.

By landing three or more of the Wishing Well symbols on the reels, the players will be able to activate this bonus feature. This is considered as the simple “Pick Me” feature under which players have to select one of the three wishing wells. And, this, in turn, will reveal multiplier value which is multiplied by the total stake of players. Thus, they will win up to 500 times of their total stake.

This bonus game will be activated when 3 Pots Of Gold lands on the reels 2, 3 and 4. There is a Leprechaun who is standing on the rock in the field. Also, 12 pots of different values are spinning around Leprechaun’s head and one of the pots which stop at bottom of a screen above arrow will be the prize of the players. And, it is the multiplier that will be applied to players’ total stake.

Rainbow Riches is a cool play slot deposit bonus game online and is liked by the slot fans all over the globe. It has a medium variance. The appealing sounds effects make this game attractive. It is a must play slot!