January 23, 2018 by MobileSlotsGuru in Slots Games

Griffins are some really mysterious creatures found in mythology and are depicted as half eagle and half lion. This slot game Great Griffin revolves around the Griffin and all the mystical things associated with him. This is 5 reels and 50 payline slot game that has some really attractive graphics and sound effects. The slot has been designed and developed by Microgaming online casino gaming software developers. Microgaming is one of the biggest online slots developers and has developed some of the most famous online slots in the industry. The Griffin slot is really lucrative and has an RTP of 96.79%.

The slot has been set against a backdrop of a mysterious chamber with green colored potions visible in the background. The reels have a light brown self-printed background and the symbols are placed beautifully on them. All the symbols are designed to suit the theme of the slot game. The symbols include a spell book, mortar and pastel, potions, feathers, candles and weighing scale. The players can adjust the size of the bet, the number of coins and the number of spins to autoplay before starting with the slot game. The player can also adjust the number of lines they want to play with. The bet max option can also be selected to place the biggest bet on the slot game. Clicking on the spin button starts the game. 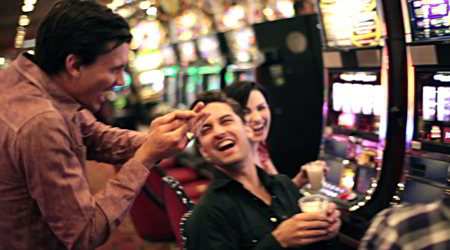 There are three special symbols in this slot game namely the wild, the special symbol and the scatter. The wild symbol is a flying Griffin and can be used to replace any other symbols on the reels to make a winning combination. However, it can not replace the Griffin scatter symbol. The scatter is responsible for activating the free spins feature. The player needs to land three or more of the scatter symbols on the reels in order to trigger the free spins feature. Once the feature is triggered, the player is given three sets of free spins and multipliers to choose from. Additionally, there is a potion meter that fills up during the free spins and ones it does, the feature can be retriggered.
There is also a pick me bonus which is activated by landing the lady symbol on the reels. This will let the player choose amongst the three bonus types and one is be rewarded to them.

The Great Griffin is one of the most interesting online slots based on mystical creatures. The slot has some really attractive graphics and sound effects in addition to the bonus features. The slot can be accessed on any mobile or desktop device and has a really smooth gameplay. So wait no more and start playing this slot game by Microgaming.